This project, managed by Claudia Bade and funded by the Saxon Academy of Sciences, has made fully accessible several hundred surviving case files of two military courts fromthe study sample (Court of the Commandant of Greater Paris, Court of the Commandant of the Rear Army Sector 580) obtained from the Federal Military Archives. Criminal case lists from a third military court were randomly inspected and analysed. Other biographical details from Wehrmacht judges were also examined: personal documents from the judges in the study sample and from the Reich military court judges, whose personnel records are preserved in the Military Historical Archive of the Czech Republic in Prague.

In 2012 archival research on selected Wehrmacht courts concluded in the Federal Archives Military Archives in Freiburg. In addition, both a statistical analysis and a data analysis for the empirical study of the courts’ verdicts was completed. This data analysis is available in an SPSS database. The interpretation of the data obtained and the further preparation of the manuscript of the monograph on the case law of the Wehrmacht judges took up most of the project’s time. At the same time, in co-operation with the Documentation and Information Centre (DIZ) in Torgau and the RoterOchse (Red Ox) Memorial in Halle, the Institute conducted a workshop on the European dimension of Nazi military justice in the Second World War. The results were published in 2015 as Volume 68 of the Institute’s ‘Reports and Studies’ series. 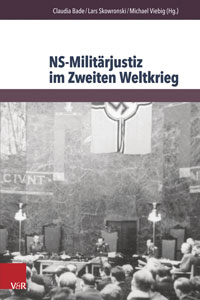