Vortrag
“Every Day They Play a Game of Pretending to Pack Suitcases”: Children Amid Russia’s War in Ukraine

On the 24th of February 2022 at 5 am, the first shells fell on the sleepy cities in Ukraine as Russiad its full-scale invasion. Many families were forced to flee their homes to find a safe place and protect their children from the physical and psychological horrors of war. On the twentieth day of the war, when the exodus from Ukraine reached more than 3 million people, the reports of the UN humanitarians estimated that a child in Ukraine was becoming a refugee almost every second. In this talk, I aim to call attention to the current situation of Ukrainian children and discuss how war, flight and migration forced by the Russian invasion impacted kids’ lives. I will touch upon children’s experience of internal displacement and migration, as well as their first encounters in the receiving points withing and outside Ukraine. The talk will bring to the fore one of the key problems that Ukrainian children face. It will discuss the issues connected with separation from their friends, relatives and one or both of their parents, the loss of homes, and detachment from usual milieu and surroundings.

Olga Gnydiuk is a postdoctoral fellow in ZARAH at the Central European University (CEU). She studied social anthropology at the University of Cambridge and received her Ph.D. in history from the European University Institute (2018). She has been researching the child care and migration policies pursued by the social workers of the United Nations Relief and Rehabilitation Administration and International Refugee Organization for Ukrainian unaccompanied refugee children at the time of post-1945 geopolitical transformations. Before joining CEU, she taught seminars on childhood history at the Humboldt University in Berlin. Her current project explores the relationship between women’s gainful employment and paid and unpaid family work construed by female trade unionists and activists in the period between the 1940s and the 1980s.

Please register before 28.03.2022 with your full name via email to: hait@msx.tu-dresden.de 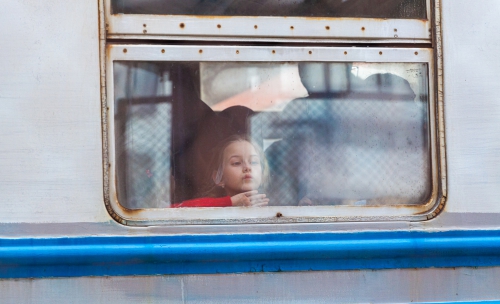