The End of Russia's Imperial Innocence

Russia's aggression war against Ukraine has revealed the need to challenge Russia's imperial innocence. Historically, Russian imperial identity revolves around the self-image of sacral martyrdom, which prevented many Russians to pay close attention to the imperial nature of Russian nationalism. The Soviet past has not been scrutinized as imperial either and currently the Soviet Union is widely perceived as an anticolonial force. But how exactly do we conceptualize the Soviet past as imperial, what does it have to do with Russian imperial identity and what are the challenges of coming to terms with it for people in Russia and its neighbors?

Dr. Botakoz Kassymbekova is a Lecturer in Modern History with specialization in Stalinism and post-Stalinism. She holds a Ph.D. from the Humboldt Universität Berlin.

The colloquium takes place via ZOOM. Please register before 09.01.2023 with your full name via email to: hait@msx.tu-dresden.de

You'll receive the registration link separately shortly before the event. 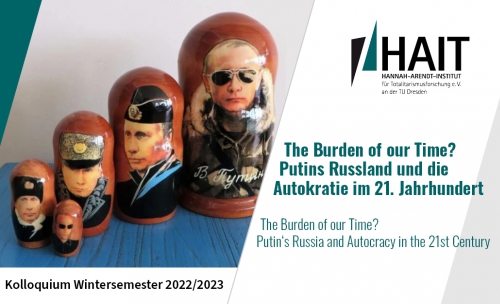