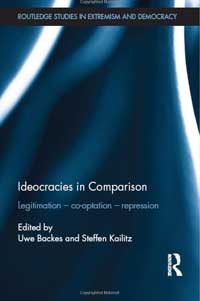 Ideocracies, or ideological dictatorships, such as the "Third Reich", the Soviet Union and the People’s Republic of China have, much more than any other kinds of autocracy, characterized the history of the 20th century. Despite their undeniable loss of significance, ideocracies have not disappeared from the world in the 21st century. This book explores the functioning of ideocracies and analyses the typical interplay of legitimation, co-optation and repression which autocratic elites use in an attempt to stabilize their rule

In the first part of the book, the contributors discuss the conceptual history of the ideocracy notion. The second part offers case studies pertaining to the Soviet State, Italy, the National Socialist Regime, the German Democratic Republic, the People’s Republic of China, North Korea and Cuba. Finally, the third part compares various ideocracies and draws together key themes.
Uniting the perspectives of history, philosophy and political science through the use of case studies and systematic comparisons, this book offers a unique examination of ideocracies both past and present which will be of interest to students and scholars researching political regimes, political history and comparative politics, as well as other disciplines.