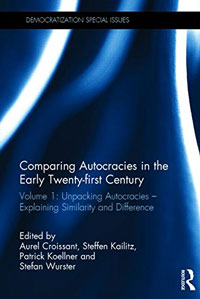 Despite the so-called Third Wave of Democratization, many autocracies have been resilient in the face of political change. Moreover, many of the transition processes that could be included in the Third Wave have reached a standstill, or, at the very least, have taken a turn for the worse, leading sometimes to new forms of non-democratic regimes. As a result of these developments, the research on autocracies has experienced a revival in recent times.

This unique two-volume work aims at taking stock of recent research and providing new conceptual, theoretical, and empirical insights into autocratic rule in the early twenty-first century. It is organized into two parts. The contributions in this first volume analyse the trajectories, manifestations and perspectives of non-democratic rule in general and autocratic rule in particular. It brings together some of the leading authoritarianism scholars in Europe and North America who address three broad questions: How to conceptualize and measure forms of autocratic regimes? What determines the persistence of autocratic rule? What is the role of political institutions, legitimation, ideology, and repression for the survival of different forms of autocratic rule?