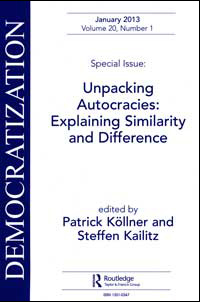 A quarter of the world's nation states and territories are ruled by dictators. Moreover, there are many regimes in which democratic and autocratic elements of rule are mixed in various ways. It thus behoves political scientists to study the trajectories, manifestations and perspectives of non-democratic rule in general and autocratic rule in particular. After a period of stagnation, research on autocracies has in recent years become revitalized. Much of this research has a comparative orientation and a range of global datasets that have become available, which enable the systematic testing of hypotheses. Yet, current research on autocracies goes beyond large-N studies. It is a pluralistic enterprise, characterized by the use of a multitude of theoretical, analytical and methodological approaches, lenses and tools. This special issue of “Democratization” attempts to fill some gaps in the newer literature by addressing questions of legitimation and repression (as well as co-optation) in autocracies, by probing into the origins of a number of competitive authoritarian regimes and into pre-electoral dynamics in non-democracies, and by finally asking what happens to dictators once autocratic regimes fall.