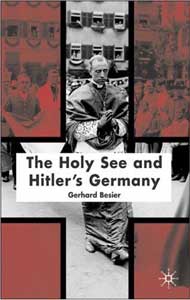 The Holy See and Hitler’s Germany

There has always been a general assumption that Pius XI (1922–1939) and Pius XII (1939–1958) failed to speak out against the crimes perpetrated by the Nazis and the extermination of the Jews that took place throughout Europe. The Vatican, an institution shrouded in mystery, has only recently made its archives accessible to the public. The authors of this book were the first non-Catholics to view the files documenting the relationship between the Vatican and the National Socialist Party in the years from 1923 to 1939. The extent to which the Vatican’s diplomatic strategy was dictated by their determination to retain their position of power in matters religious and political, in particular maintaining a strong anti-Bolshevik line, is only now revealed. At the same time, they were also prompted by the need to attend to their pastoral duties, caring for the welfare of their flock, and the endeavour to prevent the commission of further atrocities. Never before has the hypocrisy and duplicity of the Catholic Church’s connections with the Nazi regime been exposed quite as starkly.