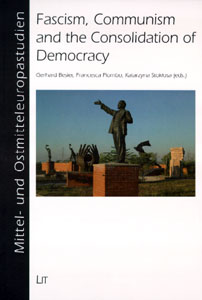 Fascism, Communism and the Consolidation of Democracy

The authoritarian and totalitarian systems of individual countries have long been studied independently of each other. The separation of Eastern and Western Europe was used as a parameter by historians. This also applies to the analysis of Communism and Mussolini’s Fascism. Only in recent years has the comparative perspective in the regional, chronological and system-oriented sense been applied, thus allowing many phenomena to be correctly understood and assessed. Central and Eastern Europe is tied to Western and Southern Europe by the experience of dictatorship and the ongoing need to evaluate and come to terms with these dictatorships.

In the present anthology Mussolini’s Fascism, National Socialism and Communism are examined comparatively. Similarities, connections and mutual influences in these dictatorships are sought. Finally, the transition from dictatorship to democracy is examined. With this collection of essays the editors intend to give impulse for inter-European comparative research on dictatorships and democracy.