In 2012, Lothar Fritze completed his studies on totalitarian thinking in Marxism and National Socialism. He published the results in his book Anatomie des totalitärenDenkens.Kommunistische und nationalsozialistische Weltanschauung im Vergleich [Anatomy of Totalitarian Thought. A Comparison of Communist and National Socialist Weltanschauungen], OlzogVerlag (Munich 2012). This comparative study yielded the following findings, among others: ‘Communist and national socialist world views differ not only in their theoretical sophistication, but also in their basic ethical orientation. Despite their substantive differences, both systems of ideas were able to serve as ideologies of domination for totalitarian dictatorships. They proved suitable for spreading enthusiasm among people, for inspiring believers to undertake actions requiring sacrifice and for (seemingly) morally justifying the corresponding procedures. In this book the author analyses the structural parallels and thematic differences of the two systems of ideas. His analysis ultimately finds that both the communist and the national socialist world views promoted that type of perpetrator who especially – and perhaps even exclusively – was mentally capable of planning and carrying out such fundamental crimes against humanity: the ‘perpetrator with a good conscience’. 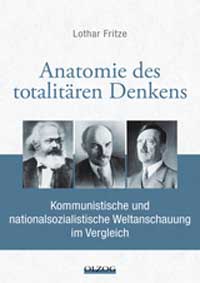