Construction soldiers in Prora and their protest against SED military policy

In this project on the refusal of armed military service in the NVA (National People’s Army), Thomas Widera explores the pacifist protest potential directed initially against increasing militarisation in the GDR, but soon also against the political system of the SED dictatorship. The study focuses on the role of conscientious objectors in the emergence of the peace movement. At the centre of attention are the construction soldiers of the NVA, who as opponents to military service acquired a distinct profile from the rejection of their socially critical behaviour and developed an effectiveness far exceeding their marginal position. One of the largest locations of the construction soldiers was in Prora. EntitledDie DDR-Bausoldaten.Politischer Protest gegen die SED-Diktatur [The East German Construction Soldiers. Political Protest against the SED Dictatorship], the studyappeared in the series of the Centre for Political Education in Thuringia. 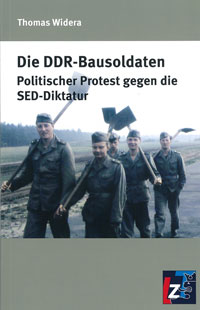