Translated into German by Eva Wiese with scholarly editing by TytusJaskulowski of the Hannah Arendt Institute, this autobiographical account of the life of Anna Walentynowicz was originally published in Poland in 2005. As a worker at the Lenin Shipyard in Gdansk, she became one of the most famous co-founders of the so-called Free Trade Unions in 1978. On 14 August 1980 her dismissal led to strikes and the emergence of the Solidarność movement. Previously unknown outside Poland, the book not only recounts the difficult life, typical in Eastern Europe, of the so-called ‘Heroine of Gdansk’. It also offers a unique presentation of the history of the Polish People's Republic, specifically from the perspective of a person who symbolised the inner core of the opposition movement in Poland, while remaining critical of the union leader Lech Walesa. On 10 April 2010 Anna Walentynowicz was killed in the Smolensk air disaster, which also took the lives of numerous Polish political leaders, such as President Lech Kaczynski.

The book appeared in spring 2012 as volume 62 in the Reports and Studies series. 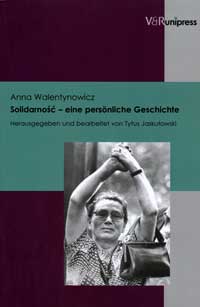