Early death sentences in the Soviet Zone. Soviet military tribunals from 1944-45 to 1947

The project was jointly conducted by the Saxon Memorial Foundation (StSG), the Centre for Contemporary History (ZZF) and the Hannah Arendt Institute for Totalitarianism Studies at the TU Dresden (HAIT), with the Saxon Memorial Foundation undertaking the co-ordination. Funding was provided by the Federal Foundation for the Reappraisal of the SED Dictatorship. Following the departure of co-editor Klaus-Dieter Müller from the Saxon Memorial Foundation due to illness, responsibility for co-ordinating the project lay temporarily with Mike Schmeitzner, who together with Müller, Thomas Schaarschmidt (ZZF) and Andreas Weigelt (administrator) issued the volume in the HAIT series in 2015. The project itself concerned the death sentences handed down by Soviet Military Tribunals (SMT) to Germans in the period between 1944 and 1947. The book and accompanying CD contains biographical accounts of 2,469 persons condemned to death. Also included are an overview of case groupings, an index and an analysis of the various groups. The research in Russian, German and US archives showed a concentration on punishing German war crimes. The book was presented in several cities of the former GDR between 2015 and 2017. 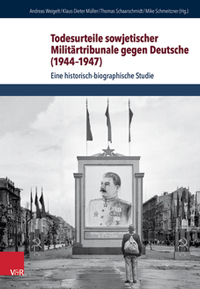