In 2012 John Frackowiak continued work on the project supported by the German Research Foundation on the German People's List (DVL) as a tool of National Socialist Germanisation policy in the areas of Poland annexed by the ‘Third Reich’. A preliminary result of this work is a lengthier essay by Frackowiak setting out the main theses of the research project. Not only National Socialism’s treatment of people of western Poland affected by the German People’s List (DVL), but also the motives of these people either for voluntarily registering with the DVL or for their deliberate rejection of the list, are being analysed for the first time on the basis of informed sources. The article originally appeared in the spring of 2013 under the title Die Deutsche Volkslisteals Instrument der NS-GermanisierungspolitikimannektiertenPolen 1939–1945 [The German People’s List as an Instrument of Nazi Germanisation in Annexed Poland 1939-1945] in the volume edited by Frackowiak and entitled Nationalistische Politik und gegenseitigeRessentiments.Das deutsch-polnischeVerhältnis von 1871 bis zur Gegenwart [Nationalist Politics and Mutual Resentment. German-Polish Relations from 1871 to the Present] (Göttingen, 2013), with essays by scholars from Germany, Poland and the Czech Republic. 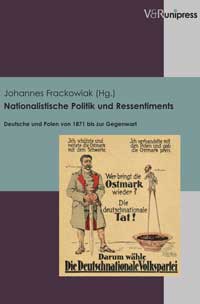