There can be no mercy. An exchange of letters during World War II

There can be no mercy.
An exchange of letters during World War II

In 2014 Francesca Weil together with Wieland Menzel and Robin Reschke began work on a comprehensive source edition. Its basis was the collection of approximately 1,800 multi-page letters from Wieland Menzel’s grandparents and now privately owned by him. This unique source fully documents the years of World War II on the one hand from the perspective of Martin Menzel, who for most of the war served as legal officer in the Polish General Government (Lublin, Krakow) and on the other hand from the perspective of Hildegard Menzel, who had to cope with everyday war-time life in a small village in eastern Saxony. Interesting is, among other things, how assessments, attitudes and priorities of the two protagonists changed in the course of the war. In February 2017 the book was published by Mitteldeutscher Verlag in Halle. 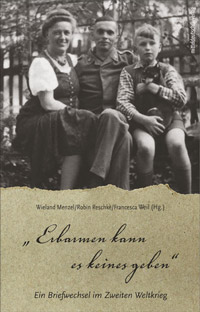