In October 2012 Jan Gülzau successfully completed his research project, begun in September 2011, on the border victims of the SED regime along the external Saxon borders, from the beginning of tightened border controls to the fall of the Berlin Wall. Contrary to the original concept, cases were also taken into account that took place before 1952. Indeed, as early as 1947 the regime intensified firing upon ‘border violators’, initially on the orders of SMAD, and then from 1949 under the new state and party leadership. Extensive archival research particularly in the holdings of the German Border Police/Border Troops of the GDR and the Ministry for State Security led to the identification by name of 21 persons documented as falling victim to the East German border regime. Of this total, eleven such incidents occurred along the Saxon-Bavarian border section, and ten along the Saxon-Czechoslovak section. Their fates are biographically documented on the HAIT homepage. 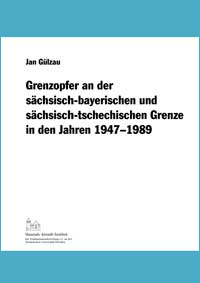